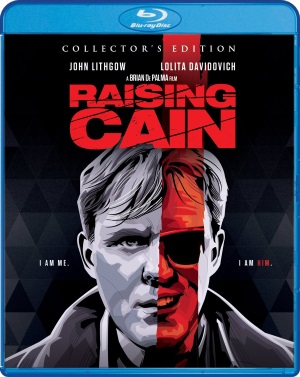 Raising Cain: Collector’s Edition (Scream Factory, Blu-ray) – Jenny (Lolita Davidovich, all soft curves and dreamy smiles) is married to “the perfect man,” says her best friend Sarah (Mel Harris). At first glance Carter (John Lithgow) seems exactly that: a thoughtful husband, a doting father, a child psychiatrist who put his practice on hold to stay home and raise their daughter while she, an oncologist, worked as the family professional and breadwinner. So what’s she thinking when she slips off with Jack (Steven Bauer), a handsome widower of a former patient she hasn’t seen in years, and makes love in the park where her daughter plays? Okay, that’s no secret. The first shot of the Raising Cain: Director’s Cut (1992/2012) puts a Valentine’s heart around her entrance, a cheesy video effect in an upscale boutique that taps right into romantic dreams that her “perfect” husband is failing to satisfy. When this dreamboat sails back into her life and Carter spies their affair, we have a pretty good idea where this is headed. And we couldn’t be more wrong.

That’s not the way the film opened when it premiered in 1992. Brian De Palma, who wrote and directed the film as his return to the silky psycho-sexual thrillers that first made his reputation, originally envisioned a dense narrative of flashbacks and switchbacks and dreams, teasing audiences into assumptions about what is really going on with his play with point of view and parodies of genre conventions. Just as in Dressed to Kill (1980), the film would open on one woman’s erotic odyssey and then careen into a thriller, revealing an entirely different story playing out around this episode. De Palma borrows from Psycho and Sybil and Peeping Tom—Carter keeps a video camera trained on his daughter’s bed for constant surveillance during the night—and then ups the ante. But he got cold feet in post-production, fearing that audiences would get distracted by the romantic prologue or lost in the thickets of his narrative intricacies, and instead opened the film on Carter and his psychosis.

The theatrical release opens with Carter’s plot to kidnap young children for a dubious experiment in experimental child rearing, reveals an amoral, sadistic twin brother named Cain who never appears in the same shot as Carter but pops up every time violence is called for (hint hint), and exposes a certain distraction when things turn romantic. Lithgow unleashes a new showboating performance as each personality emerges, flamboyant characterizations with theatrical flourish that seem to exist on another plane from the more naturalistic characters around him. De Palma gives the game away in the first act and the crazed (il)logic of the story and larger-than-life personalities fighting for dominance over Carter’s vessel plays out in a conventional narrative structure. The resulting film was almost universally panned in mainstream reviews and remains De Palma’s most polarizing film among his true believers, many of whom see it as a bad self-parody.

Raising Cain: Collector’s Edition features both the theatrical version and the Director’s Cut, which was blessed by De Palma but actually edited by Peet Gelderblom, a commercial filmmaker from The Netherlands. He used an early draft of the screenplay, a commercial DVD, and a few digital effects to reconstruct the film that De Palma (who was never satisfied with the theatrical cut) original intended to make, as best he could using only footage from the release version, and he made a video essay to accompany his cut, which he treated as essentially an intellectual exercise, a “what if” seeking to redeem a maligned project. De Palma praised Raising Cain Recut, as Gelderblom called it, and insisted that Scream Factory include it on their Blu-ray release. Gelderblom oversaw the mastering (using the same digital transfer as the theatrical cut) and De Palma christened it his Director’s Cut.

I’m not so much interested in a comparison of the two films as an appreciation of the Director’s Cut, which had been available to stream at once time but which I viewed for the first time in this Blu-ray release. It was like seeing the film again for the first time, mainlining De Palma’s thematic obsessions and stylistic adventurousness in a form suited to its component elements. As in the theatrical cut, logic is bent for dramatic and thematic effect. A pick-up truck spends ten minutes back up and pulling forward for no discernible reason in a tiny parking garage while a treacherous steel spear juts out the back (“You’re going to kill someone with that sundial!”). De Palma turns the entire gimmick into a dumb joke with a punchline that borders on a castration gag. He’s got a strange, often dark sense of humor that comes out in playful twists genre conventions. When he brings in a psychiatrist to explain Carter’s split personality, the exposition plays out in a grand, glorious long take that travels two stories and innumerable hallways as the psychiatrist (Frances Sternhagen) gets so caught up in her own explanation that she keeps wandering out of the shot, only to be pulled back and steered into the right direction by the detective (Gregg Henry).

Like so many of De Palma’s films, the narrative slips into dreams and is jolted back out of them in startling cuts, but folded into structure that has you questioning what, if anything, is “real,” the entire film is like a dream. As the exposition so insistently explains, the personalities within Carter have to go to sleep to allow another to take over. In the slow-motion rapture of the climax, as the police swarm a hotel in the midst of a rescue and murder, no one even notices a furtive figure in a trenchcoat, face-concealing hat, and bare feet sneak off the only elevator in the building and slip away from the cops. And sleep suddenly overcomes the entire police station when Carter escapes, everyone but Jenny, who wanders the unaccountably empty building like a heroine in a haunted house. This is either the most blatant portrait of police incompetency ever put on screen or a cinema dream where psychology doesn’t merely determine character but becomes character: yearnings and anxieties and fears and desires overcome physics and reason, and stylistic ecstasy trumps all. Almost every moment with Carter and Jenny is heightened to nightmare, fantasy, or reverie, with the cops trying to put a logical box around it. They’re simply applying the wrong kind of reason. This vision of Raising Cain parodies, embraces, celebrates, and experiments with the psychodrama and plays on De Palma’s thematic obsessions and stylistic trademarks (and our expectations of them) to create a film may indeed have been a little too far ahead of its time. Now, in the wake of films like Pulp Fiction and Memento and Eternal Sunshine of the Spotless Mind and Inception, it looks cheeky and clever and self-aware: the ultimate De Palma puzzle box.

Raising Cain: Collector’s Edition truly is a collector’s edition. Along with the theatrical cut remastered from its Blu-ray debut and the Director Approved release of the recut, it features Peet Gelderblom’s 2012 “Raising Cain Re-Cut: A Video Essay” (which uses the recut as a jumping off point to analyze De Palma’s style and sensibility) and the new “Changing Cain: Brian De Palma’s Cult Classic Restored” (basically a two-minute introduction to the recut) plus new video interviews.

The most illuminating interviews are from two actors who De Palma cast in multiple films. John Lithgow talks for 30 minutes about making his third film for De Palma and tackling a bravura part that was essentially five different roles and Gregg Henry (who plays the detective) discusses how, in addition to his role, he played Lithgow’s alternate personalities off-camera while Lithgow was on-camera. Both actors show a real affinity with and appreciation of De Palma’s approach and cinematic experimentation. It’s easy to see why they worked so will with the director. Also interviewed are actors Steven Bauer (24 minutes), Tom Bower (8 minutes), and Mel Harris (8 minutes), and film editor Paul Hirsch (10 minutes). Unfortunately he does not discuss the rough cut or De Palma’s struggle in the editing. What’s not here is an interview with De Palma himself, all the more glaring an omission given the numerous interviews he has given for other disc releases. I guess we’ll just have to see the new documentary De Palma to get his thoughts on the film.

You can see Peet Gelderblom’s work on his Vimeo page.