There’s a great cast around the kids—Bill Murray and Frances McDormand as distracted yet protective parents, Edward Norton as a nerdy but sincere scoutmaster, Harvey Keitel as a genially despotic scout commander, Tilda Swinton as the coldly officious Social Services, and especially Bruce Willis as a sad, lonely island lawman who gets a second chance—but the film belongs to the two kids. For all their issues, they are healthier than the adults of Anderson’s previous films, and their commitment inspires these adults to take stock of their failings and make an effort to become better, more honest people.

Like all of Anderson’s previous films, the sixties-set Moonrise Kingdom is filled with the period music and fashion and the offbeat textures he loves so much, but there’s more restraint this time. The delightful details are merely that, grace notes to the culture around our characters. And while Anderson plays with the conventions of young love, runaway adventure, and family comic-drama with a knowing, modern sensibility, he never makes fun of it. The sincerity is genuine, and it makes the film glow.

It’s been on Blu-ray and DVD before in simple but handsome editions but Anderson apparently saved up his goodies for the Criterion edition. He supervised the 2K digital transfer and is joined on the commentary track by Criterion President Peter Becker and child actor Jake Ryan, and they call up co-writer Roman Coppola and supporting actors Bill Murray, Edward Norton, and Jason Schwartzman to elicit comments from them. “The Making of Moonrise Kingdom” consists of an 18-minute featurette shot on the set of the film plus four storyboard animatics and narrator tests, five minutes of screen tests of the child actors, and a short piece on the miniatures used in the flood sequence. Edward Norton’s home movies from the set (shot on iPhone) run about 20 minutes and are introduced by Norton.

The rest of the supplements are bite-sized pieces: “Welcome to New Penzance” features footage of the locations, “Set Tour with Bill Murray” is a quick 3 minutes, Bob Balaban introduces short segments of actress Kara Hayward (Suzy) reading excerpts from the (fictional) books featured in the film, and “Cousin Ben” features additional footage of Jason Schwartzman as Cousin Ben. The 20-page booklet an essay by critic Geoffrey O’Brien, short pieces by young writers on the film, and art from the film, and there’s a small collection of additional ephemera including a map of New Penzance. 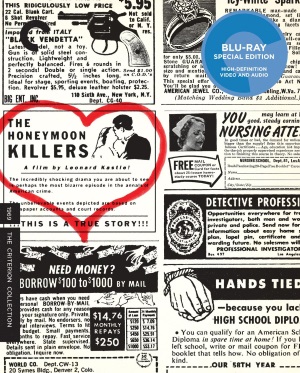 The Honeymoon Killers (Criterion, Blu-ray, DVD), Leonard Kastle’s alienating B&W story of a dim Latin gigolo (Tony Lo Bianco) and a frumpy, unfulfilled overweight ex-nurse (Shirley Stoler) who team-up to romance and murder a series of lonely women is based on a true story, but his jarring docu-style, with its mix of black humor and blood chilling horror, is anything but a realistic portrait.

Alternately ferocious and tender, mundane and terrifying, it’s the most perverse of love stories and Kastle directs the toxic tale as if off the pages of “True Detective” and accompanied by the startling flashbulb-bright photography by Weegee. Kastle was an opera composer by profession and had never directed a film when he took over from the initial director, Martin Scorsese (he was fired after a week). Kastle never made another, but based on the strength of this unsettling early American indie he should have. His direction of Stoler and Lo Bianco is strong (despite yourself, you can’t help but be moved by their devotion to one another) and his use of claustrophobic close-ups is wonderfully unnerving, especially as he hones in on the helpless, terrified face of a victim awaiting her execution while the conversations of the killers and the scrapes of the murder weapon can be heard out of frame.

Previously released on DVD by Criterion, it has been digitally remastered in 4K from a recent restoration for its Blu-ray debut (it looks stunning: B&W looks so good on a well-mastered Blu-ray) and features two new supplements: the 25-minute interview featurette “Love Letters” with actors Tony Lo Bianco and Marilyn Chris and editor Stan Warnow and produced by Robert Fischer, and the video essay “Dear Martha…” by Scott Christianson, which looks at the real Martha Beck and Ray Fernandez and their trial and incarceration with rare photos and documents.

Carried over from its earlier release is a 2003 video interview with director Leonard Kastle and the essay “Broken Promises” by Gary Giddins featured in the 10-page foldout insert. 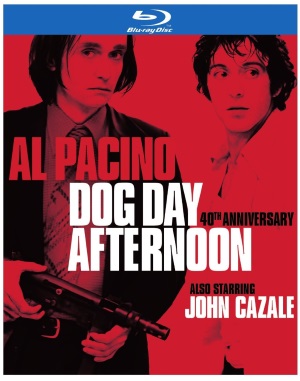 Dog Day Afternoon: 40th Anniversary (Warner, Blu-ray, Digital HD) – After making Serpico together, Al Pacino and director Sidney Lumet reunited for this gritty, funny, electric drama about a failed New York bank robbery turned gripping hostage situation turned energetic media circus. Based on a real incident, it’s shot by Lumet on the streets with a documentary-like immediacy and a dramatic intensity that builds on complications both surprising and startlingly real. The rising temperatures don’t necessarily bring out the worst in these characters, they just bring them out with more intensity: Sonny (Pacino) charged up in front of the cameras, crowds cheering him on with chants of “Attica! Attica!,” the cops simply trying to keep everyone alive in the midst of an outlandish media circus. Don’t you love summer in the Big Apple?

John Cazale (who played Pacino’s brother in the Godfather films) plays his accomplice here, Charles Durning is the police detective trying to keep the situation under control as crowds start cheering for the robbers, and Chris Sarandon earned an Academy Award nomination in a small but memorable role as Pacino’s lover. Nominated for 6 Academy Awards, it won for Frank Pierson’s screenplay. James Broderick co-stars as the FBI agent and Carol Kane, Lance Henriksen and Dominic Chianese co-star.

The Blu-ray includes commentary by director Sidney Lumet, a four-part documentary on the making of the film, and the featurette “Lumet: Film Maker,” all carried over from the previous Blu-ray release.

The bonus disc presents the 40-minute documentary I Knew it was You: Rediscovering John Cazale, a lovely tribute to the actor who only appeared in five features—each of them an Oscar nominee for Best Picture—and never received a single Oscar nomination. Richard Shepard profiles this actor’s actor, a New York stage veteran who worked with and earned the respect of some of the greatest actors of his generation, among them Gene Hackman, Robert DeNiro and Al Pacino (who said Cazale that him more about acting than any other actor). The disc also includes commentary by director Shepard, extended interviews with Al Pacino (which overflows with love and friendship) and playwright Israel Horowitz, and two short films Cazale made in the sixties: The America Way (1962) and The Box (1969).