Stanley Kubrick: The Masterpiece Collection (Warner, Blu-ray) – There are no remastered editions or new-to-Blu-ray discs in this box set of eight Kubrick classics, from the 1962 Lolita to his final film, Eyes Wide Shut (1999), but this ten-disc set does include the previously-released supplements on each film plus it features two new-to-disc documentaries and one new-to-Blu-ray featurette, along with a lovely 78-page book of stills, storyboards, production art, script pages, and other production paraphernalia from the featured films. Which makes it, if not exactly essential (if you’ve already invested in past Kubrick box sets), at least a terrific cinephile gift set. Here’s the skinny on the films and the extras, which is currently available as an Amazon Exclusive. 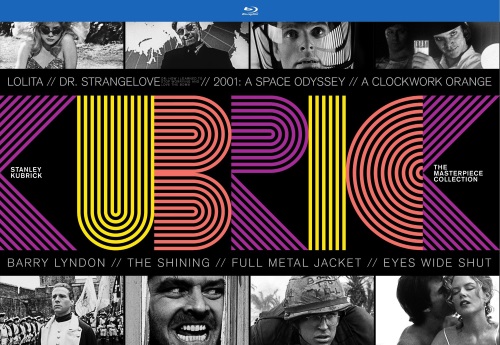 You have to admire the audacity of Kubrick to adapt Lolita (1962), Vladimir Nabokov’s controversial novel of a middle-aged man’s obsession with a young teenage girl in the age of pre-ratings censorship. (The ad campaign turned that into a selling point, with the tag line: “Can you believe they made a movie of Lolita?”) Kubrick and Nabokov (who adapted is own novel) raised the age of the grade school “temptress” and left most of the seduction to suggestion, and still made a more provocative and sensitive film than the 1997 remake. James Mason is almost pathetic as the repressed author Humbert Humbert who continues to justify his infatuation with teenage Lolita, yet he’s never less than human. Sue Lyon is Lolita, Shelley Winters her blowsy mother and Peter Sellers (soon to be cast by Kubrick in multiple roles in Dr. Strangelove) is the creepy Clare Quilty.