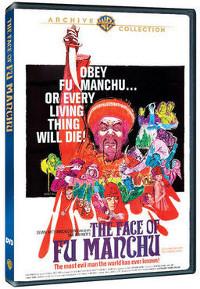 There is nothing tasteful about a Fu Manchu movie. The stories of a ruthless, sadistic, depraved Mandarin crimelord, originally created in a series of lurid pulp thrillers by Sax Rohmer in the 1910s, traffic in a jingoistic fear of Asian assault on western culture (especially the empire-building Britania). Fu Manchu is a criminal genius with three doctorates, a passion for assassination by exotic poison, and an obsessive quest for world domination. And he has been, since the beginning, played by Caucasian actors in silk robes, long-mustaches, and what can only be called yellowface make-up.

Dr. Fu Manchu returned with a vengeance in the 1960 in a series of lurid British thrillers from Harry Alan Towers, a British writer/producer cashing in on the Hammer success with his own low-budget thrillers and horror films, and starring Christopher Lee as the insidious Dr. Fu Manchu.

In the 1965 The Face of Fu Manchu (Warner Archive), the first of five Fu Manchu features from Towers and Lee and the character’s first big official screen appearance since 1940, he kidnaps a brilliant scientist, forces him to turn over his latest, potentially destructive invention by means of torture (usually of a beautiful young daughter), and then holds the world ransom. That basic structure recurs in the sequels, just as it drove many a James Bond film and a couple of Pink Panther sequels and Austin Powers movies.

Not that anyone watched these films for their plots. The film opens on Fu Manchu’s own execution, a scene right out of Hammer Films’ The Revenge of Frankenstein. Clearly this is not the end of Fu Manchu, who returns for his revenge with a literal underground kingdom beneath the streets of London, a fanatically devoted cutthroat army in black pajamas and red sashes (part Viet Cong, part Playboy After Dark), and a small private zoo of poisonous spiders and deadly snakes.

The budget is low and the momentum is slow, but Towers (who also penned the screenplay under his pseudonym Peter Welbeck) and director Don Sharp deliver the lurid kinkiness and exotic sadism with a bare-bones spectacle. The approach is equal parts Hammer Films gothic style on the cheap (without the decadent atmosphere or vivid color) and German “krimi” thriller, with its exotic murders and deadly conspiracies. In one scene Fu Manchu ties up a female traitor for a lashing, only to change his mind and drown her in full view of his prisoners as a lesson in obedience. (His loyal and equally sadistic daughter Lin Tang, played by Tsai Chin, almost throws a tantrum when he stops her seconds before letting loose with the whip.) In the next, he murders the entire population of a small British town as an object lesson to the British government. In between there are more conventional gang brawls and shoot-outs, a little conventional spy/cop movie distraction in a 1930s-era thriller.

Lee never affects a Chinese accent and the even goes light on the eye lifts, suggesting a Eurasian mix, a British-educated multinational who has rejected the west and embraced the ancient criminal code of the Chinese underworld. It makes him, if nothing else, a little more rarified, a man of two cultures who reaches for the worst of both. Nigel Green is Fu Manchu’s nemesis, the dogged Scotland Yard agent Nayland Smith, and he brings a strength of conviction that makes him a fair match for Lee.

The same can’t be said for Douglas Wilmer, who takes over for Green in The Vengeance of Fu Manchu (Warner Archive), the third film in the series. The plot is the same, with the twin goal of ruling a global criminal empire and destroying Nayland Smith in a plot involving plastic surgery and a murder frame-up. The fake Smith walks around as if in a trance, unspeaking and for the most part unmoving, which frankly isn’t much of a contrast with Wilmer as the real Nayland Smith, who is kidnapped far too easily early in the film and never convinces us he ever had the strength to take on Fu Manchu.

While absurdly complicated and overflowing with supporting characters (including Horst Frank as an American crime ambassador who speaks as if he came out of the Vienna underworld), it certainly isn’t dull, and Towers produced much of it at the Shaw Brothers Studios in Hong Kong, giving it a globetrotting scope. Just so don’t forget his motivation or the title of the film, Lee manages to work the word “vengeance” into his dialogue in practically every scene

Speaking of Boris Karloff, he stars in The Sorcerers (Warner Archive), the second feature from cult director Michael Reeves, a promising young filmmaker of the sixties who died of a drug overdose after directing only three films. It’s really quite a strange mash-up of drug movie, counter-culture spectacle, thrill-kill drama, and addiction drama. Karloff is a hypnotist and inventor who uses mind-control not just to manipulate a young man but to experience his sensations and Catherine Lacey is his wife and assistant. Karloff was almost 80 when he made the film, frail and weak (he died only two years later), and it invests his character with a palpable hunger for the charge of youth this invention offers, but it’s Lacey’s character who becomes addicted to the rush of illicit thrills as she pushes their victim (played by Ian Ogilvy) to murder, and like a junkie she’s driven to do anything to get her fix.