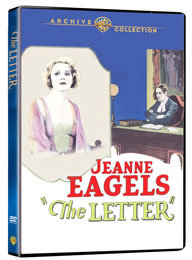 The movies learned to talk in 1927, as they say, but it took a few years to find its voice. After all, it took more than thirty years of filmmaking to arrive at the storytelling grace and sophistication of Sunrise and Street Angel and The Crowd, a mode of filmmaking that came to an abrupt end with the arrival of sound. But it wasn’t simply a matter of adjusting to new technological limitations. The movies still needed to find its own, unique vernacular and way of speaking.

The 1929 version of The Letter, the first screen version of the W. Somerset Maugham play, is also the sole surviving sound-era performance by Broadway legend Jeanne Eagels. It’s not a particularly good film—the 1940 Better Davis version, directed by William Wyler, is far more compelling—but it is a revelation of a performance and an illustration of the challenges filmmakers faced in the early sound era.

Apart from a fluid (and wordless) opening that culminates in a camera creeping through the jungle bush to reveal a rubber plantation manor, it is a static production that stops to observe stiffly-staged scenes of actors frozen in stand-offs. Part of that is surely the demands of early sound recording, which was recorded directly on film with noisy cameras that were boxed up to blimp the sound. But it also suggests that director Jean de Limur (like so many directors at the time) looked to the stage for guidance in directing actors through the new dimension of sound.

The subtle nuances of actors’ faces and the dance-like revelation of character through gesture and body language that defined the best silent film acting are lost as cameras kept their distance and editors had to wait for silences to cut to a new angle. In its place are outsized performances with dialogue too often delivered as speeches or soliloquies and physical business overworked to distraction. These are performances designed for stage, big enough to be seen by the back row and paced with pauses for audience reaction, made arch and ungainly by the intimacy of the camera magnifying every gesture and exaggerating every pause. Even the sets look like they’ve been designed to sit behind the proscenium arch, with stage entrances and exits off to the wings and the camera set up to isolate the sector where the action is happening, completely forgetting that there are other actors in the room for long sequences. Apparently the cutaway was either forgotten or too difficult to manage in the early sound era.

The dialogue is just as arch, falling back on stage conventions. The movies had not discovered the stylized patois of street slang and drawing room wit and smart-aleck snappiness that exploded in the early thirties of gangster films and backstage musicals and streetwise romantic dramas and comedies.

Amidst the proclaiming and posing, however, Jeanne Eagels delivers a slinky, fluid performance. While the rest of the dialogue tends toward the formality of a lecture, Eagels portrays a woman who spins a fiction under oath like a diva playing the wronged woman, and then loses her composure and social self-control under pressure, her words pouring out as if carried by a flood unchecked emotions. The unexpected cadences of her line readings turn into spoken arias. It’s the first inkling of a modern sound film performance, exciting and unexpected with the feeling of spontaneity, not yet perfected but definitely alive in an otherwise fossilized film.

On a different wavelength, but alive in a different way, is Herbert Marshall’s lazily decadent performance as Eagels’ bored, debauched lover. Marshall later starred in the 1940 remake as the cuckolded husband, all dignity and aristocratic composure, but the Marshall of the 1929 version looks forward to the rare roguish and corrupt figure he played for Hitchcock in Foreign Correspondent.

Available through the Warner Archive here.