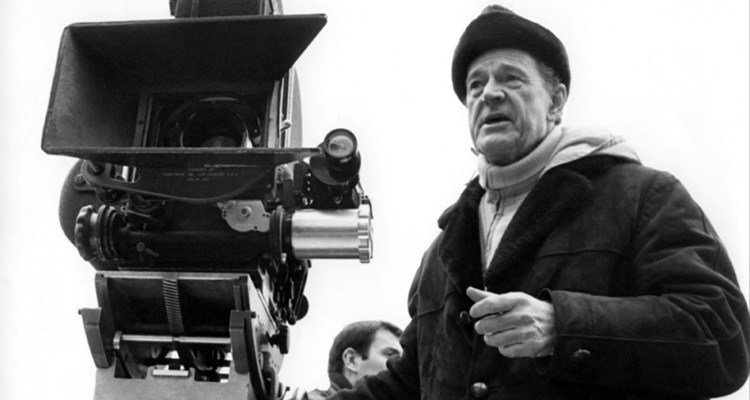 Thursday, June 30, is the birthday of Emil Anton Bundsmann, who entered the world in 1906 at San Diego, California, and departed it April 29, 1967, in Berlin, Germany. In between he had streamlined his name to Anthony Mann, become a movie director, and acquired a passionate cult among connoisseurs of film style for having made some of the most lucidly and powerfully visualized films in American cinema. Few filmmakers have equaled his genius for fusing landscape and dramatic action, and his heroes—in the films noir of the late Forties and his majestic Westerns of the Fifties—are a compellingly conflicted lot.

He worked off-Broadway from 1925 and entered film in 1938 as director of screen tests for producer David O. Selznick (most famously, on Gone With the Wind). After serving as assistant director on Preston Sturges’s Sullivan’s Travels, among others, he started directing in 1942 and languished for several years in B-movie assignments at mostly B-movie studios. But one of these was Eagle-Lion, an interesting operation under the enlightened executive producer Walter Wanger, and there Mann’s talent began to shine. Working with the brilliant, Hungarian-born cinematographer John Alton, he scored a personal triumph with T-Men (1947), a police-procedural thriller in the then-fashionable semidocumentary mode, but shot through with bold angles, stark contrasts, and dynamic deep-focus compositions. The team followed up with the pungent Raw Deal, He Walked by Night (credited to Alfred Werker, who had fallen ill), and The Black Book (aka Reign of Terror). Their remarkable inventiveness on limited budgets won them entree at Hollywood’s most prestigious studio, Metro-Goldwyn-Mayer.

At MGM Mann collaborated only twice more with Alton, on Border Incident (a bravura, rural reworking of T-Men) and Devil’s Doorway, an overwrought but sympathetic pro-Indian Western. But the visual strength and ingenuity of the director’s work remained constant, whether directing (sans credit) the crowd scenes of Mervyn LeRoy’s Roman epic Quo Vadis? or the urban noir Side Street, in which he turned New York streets and skylines into canyons and mesas.

In that respect, Side Street was a bridge to Mann’s other key genre: the Western. He made one of those, a crazy, hyper-Freudian thing with the classics-invoking title The Furies (available on Criterion DVD). Around that time James Stewart hired him for Universal’s Winchester ’73 (1950), a film originally slated for Fritz Lang. It marked the beginning of another extraordinary collaboration, this time between director and star, continuing through Bend of the River, The Naked Spur, The Far Country, The Man from Laramie, and the non-Westerns Thunder Bay, The Glenn Miller Story, and Strategic Air Command. In most of these, Stewart played a much more psychologically precarious character than any first-rank Hollywood star—least of all the preeminent exemplar of homespun American values—had ever essayed before.

After falling out with Stewart as production got underway on Night Passage (1957), Mann went on to direct at least one more masterpiece, the bleak Korean War episode Men in War (1957), and one more fine Western, Man of the West (with Gary Cooper, 1958). But as the decade came to an end the director was replaced on two very different epic projects: MGM’s remake of Cimarron and Kirk Douglas’s personal production Spartacus (the sulfur-mine opening is eminently Mannly). Mann had the next-to-last laugh: the 1961 El Cid was the finest entry in the turn-of-the-Sixties historical roadshow cycle. But he lost his way in that era of international co-production: Fall of the Roman Empire (1965), though pictorially resplendent, was one epic too many (Ridley Scott’s Gladiator is a sort-of remake), and Heroes of Telemark (1964) a misfired Guns of Navarone. His last film, the despairing spy movie A Dandy in Aspic (1967), was completed by star Laurence Harvey after Mann’s sudden death of a heart attack.

Was Anthony Mann a director of the first rank? Not when the touchstones are Lang, Ford, and Hawks. Mann was capable of overplanning his movies till they became airless (e.g., The Tin Star), of overdoing and falsifying idiom (God’s Little Acre, a personal favorite of his), of spinning his wheels (Thunder Bay) or wasting his time (Serenade, a vanity offering to then-wife Sarita Montiel). But his best work goes a long way toward making film noir and the Western our two richest genres, and his relentless pursuit of dynamic images ensures him the esteem of anyone who believes that movies should be worth looking at, minute by minute, frame by frame.

You can do quite a bit of looking-at this Thursday. Turner Classic Movies is lighting up a daylong birthday candle for Mann, starting with a couple of (probably unremarkable) B musicals he made early on. Sing Your Way Home (1945) is on at 4:15 a.m. Pacific time (7:15 EDT); Bamboo Blonde (1946), at 5:30 a.m. Then dark lightning strikes in the form of 1951’s The Tall Target (6:45 a.m.), a brilliantly crammed suspense film set mostly aboard a train rolling through the night from New York City to Washington, D.C.; it’s classic film noir, except that the year is 1861 and there’s a plot to assassinate Abraham Lincoln before he can be inaugurated president.

8:15 a.m. brings Follow Me Quietly (1949), a 59-minute suspense film which some credit Mann with co-directing and/or co-writing (the film’s acknowledged director, Richard Fleischer, cheerfully told a Seattle Film Society audience in 1979 that the idea of Mann’s involvement was “a total canard”). Two O’Clock Courage (1945) at 9:30 a.m. and Desperate (1947) at 10:45 a.m. are two more B noirs, the latter demonstrating—as does The Tall Target—that the director could create vividly chiaroscuro scenes of deep-focus dynamism without cinematographer John Alton to light the way.

However, Alton was emphatically on the case for the last three Mann pictures TCM is showing Thursday: The Black Book (1949, noon), Border Incident (1949, 1:30 p.m.), and Devil’s Doorway (1950, 3:15 p.m.). Border Incident reworks the formula of Mann’s breakthrough feature T-Men, upping the dramatic tension and stylistic invention to a fever pitch. (Don’t be deterred by the presence of MGM contract stars Ricardo Montalban and the bland George Murphy—this is one fierce movie.) Devil’s Doorway filed its brief on behalf of Native Americans mistreated by white society several months before the better-known Broken Arrow, and it’s intoxicating to see hardcore noir style applied to the Western genre.

But if you see only one entry in this Mann marathon, make it The Black Book. This black-comedy treatment of the French Revolution as gangster film is like a nonstop devil-wind of shrapnel, its paranoid compositions and camerawork so charged it has to explode. The American cinema’s premier production designer William Cameron Menzies is credited as producer but not as art director; yet surely his contribution was huge, working miracles to create an atmospheric period piece on little more than B resources. Philip Yordan co-wrote the script—and one pitch-dark scene between Robert Cummings and Arlene Dahl strikingly foreshadows the reunion reverie of Joan Crawford and Sterling Hayden four years hence in the Yordan-written, Nicholas Ray–directed Johnny Guitar. Still, I cherish more Richard Basehart as the phlegmatic Robespierre dismissing crony and arch-conspirator Arnold Moss: “Fouché, why don’t you take a walk?”