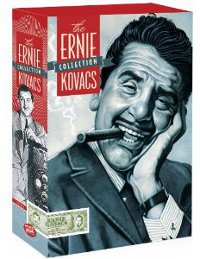 Sometime in the late 1970s, some enterprising programmer at PBS had the brilliant idea of resurrecting a series of half-hour comedy specials from the late 1950s written and produced by and starring Ernie Kovacs and running them back to back with its long-standing reruns of the ever-popular Monty Python’s Flying Circus. With that single connection, a whole new generation discovered the genius of Kovacs and his creative approach to TV comedy, which twenty years later had aged only in terms of the tools. It’s now more than 50 years since his final special was broadcast (posthumously, it must be said; he died weeks before it ran) and while the technology is primitive, the inspiration, the unexpectedness, the ingenuity and the grace of execution is as fresh and surprising and funny as ever.

Those specials are collected in Shout! Factory six-disc set The Ernie Kovacs Collection—they are indeed the highlight of a box of comedy genius—but merely represent a single disc in the six-disc set, the apex of work he began early in the 1950s in chat shows, variety specials, game shows and whatever else he was offered.

Ernie Kovacs was both the George Melies and the Tex Avery of live TV, playing with the untapped possibilities of the still evolving medium by imagining the impossible and finding the technical resources (some of them ingeniously simple) to make it happen. In an era before computer animation, digital editing or even videotape, when sketches played out like a filmed stage show, he created gags with the quality of cartoons and defied audience expectations with images created with primitive blue-screen and spilt-screen effects, unexpected editing and self-reflexive acknowledgements of his place a TV entertainer interacting with an audience. His inventive use of the tools of the medium and his conceptual approach to comedy was not simply ingenious, it was in the service of wildly creative humor, and his legacy is seen in everything from Laugh-In and Saturday Night Live to Monty Python’s Flying Circus and David Letterman.

What’s so rewarding about this set—the pure entertainment value aside—is how it reveals that this distinctive sensibility was there from the beginning of his TV work when he hosted a morning show out of Philadelphia and various other chat show formats for NBC through the early fifties. Kovacs is genial and fun, always appearing to riff off his prepared material as he segued from the familiar TV host duties to conceptual gags like a video DJ, and always bringing the audience along as if a conspirator in his pranksterish plot to reveal and poke fun at the conventions of the live TV medium. He is remarkably relaxed in front of an audience or speaking to a camera with a conversational ease, a gift that is often forgotten when remembering his work as a comic innovator. And it’s all the more effective set against his cheeky gags and wild comic ingenuity, like he’s setting the audience up for a familiar skit or variety show presentation and then pulling the rug out from under all expectations without blinking.

The chronological collection isn’t comprehensive by any means—there were no kinescope recordings made of his earliest shows and copies of others have been lost (destroyed actually, like so much of the early TV record, to clear out the “clutter” of the network archives)—and Kovacs was so prolific that such a project would be daunting even if the material was available. But there are surviving clips of some of his earliest shows and complete kinescope recordings of key programs, such as his NBC morning program The Ernie Kovacs Show (1955-1956) and his evening show by same name, a variety show that was a summer replacement for Sid Caesar in 1956. (Some of the programs have had the musical performance edited out due to the cost of music clearances but the Kovacs portions are intact.) And while he resurrects familiar characters (Percy Dovetonsils, the martini-swilling poet laureate of bad verse) and recurring skits (the simian orchestra The Nairobi Trio in all its incarnations), much of the comedy is designed for the TV audience rather than a studio audience, such as a marvelous “ghost dance” where chroma-key video figures are superimposed to interact with a live performer. Again, the technology is primitive but the execution is quite graceful, at times lovely and all the more impressive for accomplishing the intricate interaction and effects live. Even the fabulous credits, delightful bits of visual experimentation created live for his own amusement.

Saturday Color Carnival: The Ernie Kovacs Show, from January 19, 1957, is the sole color broadcast from the collection and the first piece of pure Kovacs creation. Dubbed “The Silent Show,” it is a half-hour comedy special featuring his character Eugene navigating a world of visual gags, sound effects and music, performed (apart from his spoken introduction to the audience) entirely without dialogue. It was essentially remade as “Eugene” in his run of monthly ABC specials (1961-1962), the shows that PBS resurrected in the seventies and revealed Kovacs as a master of the medium.

The eight half-hour productions (five of which are on the set) were shot and edited on videotape for broadcast rather than produced live and Kovacs embraces the opportunities of the studio-shot production to shape everything the program from start to finish as a comic symphony. Rapid-fire gags are cut between odd conceptual pieces and snatches of classical music become the soundtrack to odd, unspoken stories that magnify the mundane into epic dramas of operatic dimensions, like a surreal live TV “Fantasia.” Here is where the conceptual creativity and technical ingenuity meets the visual grace and dramatic power of visionary filmmaking for the small screen. He turns cigar commercials into high concept comedy pieces (he won a Clio award for one of them) and even the credits are strange and wonderful creations filled out with cartoonish gags and droll visual commentary, especially in the final special, which was broadcast commercial free in honor of Kovacs’ after his untimely death at the age of 42. Fifty years later there is still nothing like it.

The technical quality of the episodes and clips caries according to source. Most are kinescope recordings (16mm films shot directly from a TV screen) and look as good as can be expected and the videotaped programs look better than expected, thanks to the preservation efforts of Kovacs’ widow and partner in conceptual comic mayhem Edie Adams.

Supplements include skit highlights (including more Percy Dovetonsils), rare behind-the-scenes footage and a reel of his brilliant Dutch Masters Cigar commercials, along with other bonus material. An accompanying booklet offers essays and appreciations (including one by author Jonathan Lethem) plus notes on the programs and the source material of the master recordings.

Matt Zoller Seitz offers an appreciation of Kovacs at Salon here and is especially taken with Kovacs as host and performer.

The final Ernie Kovacs broadcast ended with a reprise of the most famous of the Nairobi Trio bits, so I’ve reprised once again below.