We were looking at a back number of the magazine for quite another reason and happened on this piece by the late Ken Eisler. It was written at a time when most of us had heard little of Werner Herzog and seen less. Ken had caught Aguirre, Zorn des Gottes in Mexico City—one of the few places the film played before Herzog became a cult item; he wrote this appreciation sometime later. There are some misremembered details here, and maybe just a little Kunstwerk of Ken’s own. These factors do not contradict our fondness for the piece, even underscore its value as a personal response, one artist to another. Aguirre is firmly established as a cult item now, and a lot of our present readers will not have access to MTN 29 of January-February 1971. So here.
– RTJ

A strange breed of Katze, this “autodidact” film director Herzog. Lacks decorum, y’ know: Dash of this, dash of that … and that … and that. Just splashes it all together up there, out front; damned if the thing don’t come out echt Kunstwerk.

To begin with, a good story. Quasi-historical. It’s 1560. A party of conquistadores toils exhausted through deepest Latin America, looking for EI Dorado. Then, in mid–Amazonian jungle, a putsch! Pedro de Ursua of Navarre, servant of king and country, is out. The new leader: ruthless, crazy Lope de Aguirre—and screw king and country. Sort of based on the annals, I gather; but such liberties, such liberties. Like, Aguirre, the Rebel Conquistador! See the Bad Seed, in Pursuit of the Sud’s Boodle, Go Coco-Loco! He Blitzkrieged the Impenetrable Jungle! It Laughed Last!…

Well, speaking of Murnau, he surely would have relished the supple camerawork of Aguirre, its saturated Andean colors; but its reckless admixture of elements—now that might have been something else again. The pop adventure yarn, maybe; but the pop parable? Colonialism? Fascism? Take your pick.

The distancing, maybe, the cool. Example: On a surging river, a big raft revolves helplessly, crowded with panicky soldiers in gleaming heavy armor, horses, Indians at each corner locked in treadmill struggle with a maelstrom that just won’t quit. Long motionless take, telephoto, from across the river. It looks curiously static, this life-and-death struggle, suspended calmly in time and space.

On the other hand, you got hot. Here’s antihero Aguirre, monomaniac pilot and sole survivor of the expedition, prowling a plagueship of a raft, adrift and helpless as the one in the telephoto take, its thatched roof torn away, littered with corpses and aswarm, all of a sudden, with an invasion of tiny chattering monkeys. Aguirre, lurching around. ranting. (”I’ll marry my daughter; I’ll find a dynasty; I’ll rule the continent … “) And now the camera begins to wheel in wide circles around the raft, faster and faster, whipping into a dervish frenzy. The film ends.

Now and then, just to confuse matters a little more, you get this nice chill spritz of Galgenhumor right in the face. Black humor; visual, verbal. An image of fat, slow-witted Fernando de Guzman—the newly appointed “Kaiser” of Aguirre’s rebel empire of El Dorado—lowering his bulk, under A’s jaundiced eye, onto an improvised jungle throne. In one pudgy hand he holds a rolled-up paper proclaiming his “sovereignty.” Like a frightened child, he fights back his tears. Aguirre intones a brief bogus ceremony of investiture as if he were reading the Magna Carta. Or there’s this guy with a rope around his neck, only seconds to live, hoisted already and poised for the drop—it’s the expedition’s deposed leader, de Ursua, and very well played too by Brazilian director Ruy Guerra; the guy reaches behind him, pulls an ear of corn out of his tattered garments, and starts calmly chewing on it.

Meanwhile, back at Aguirre’s raft, we approach a large empty clearing on the right bank of the river. Suddenly a mob of excited, wild-looking Indians is pouring into the clearing. They’re jumping up and down, emitting strange twittering cries, brandishing weapons. Aguirre cranks the heavy scowling visage an Old Testament god laid on him, about a quarter-turn to the left. “What are they yelling?” he inquires of Balthasar, the bilingual captive Indian. “Yell?” Balthasar pauses thoughtfully. “Yell ‘Fleisch! [Meat!]” Another pause. “Yell, ‘Fleisch! Fleisch is coming!'”

And amidst this jumble of elements, one more paradoxical item: A sense of form. Take that baroque conclusion—clambering tiny monkeys, spinning camera, Aguirre ricocheting around the doomed raft. It is linked, stunningly, to the very beginning. By sound. The opening shots are of minuscule brightly colored figures seen from a long way off, through thick mist, winding very slowly down a tremendously steep and spectacular mountain slope. S-curves are described in a few quick overhead shots; but mostly the camera just glides, as slowly as the progress in longshot of the single-file party negotiating the slope. The music behind this is tailored to the mood: deeply colored. harmonic motion virtually nil, hushed, but rich. Choirs: voices holding notes and sustained string sounds. Mysterious, open, classical. Ninety minutes later, with a kind of subliminal shock, you hear this music again. It flows unhurried with the current of the river while the camera spins like a … brain seizure? a buzzard? a maelstrom? around and around the unmanned raft.

With disjunctions on this order, who needs decorum? Sez I, sez I. Sez Jan Dawson, New Statesman, June 1, 1973, from Cannes: ” … Herzog tried disastrously…. an absurdly Teutonic-looking Klaus Kinski … ” Well, yeah: I mean, sure: than Kinski they simply don’t come looking more Teutonic, you’d have to be blind not to see that—the long yellow Aryan hair; the great, heavy, lowering Gesicht on him; the works—Hell’s bells, same day he was playing Lope de Aguirre at Mexico City’s Regis uptown, you coulda caught him as The Beast of the Yellow Night down at the Theatre Jalapa. So what? Another anomaly, another disjunction.

Produces some extraordinary images of an extraordinary resonance, too. Aguirre, yes, ultra-Teutonic this conquistador, in extreme closeup on the left side of the screen, blond-maned, iron-helmeted, saturnine, brooding, motionless. He’s glowering left, at something ‘way beyond the frame. Opposite side of the screen, also in extreme closeup, but looking straight into the camera eye, the light, precise features of an aged Indian. On a panpipe, he is playing over and over, with increasing breathiness, a jiglike short repetitive tune (“… their eyes mid many wrinkles, their eyes / Their ancient, glittering eyes, are gay…”)

Now a dissolve takes us from this absurd juxtaposition, via the uneven wooden rows of the panpipe, to a shot of the crude palisade that encloses the wounded Pedro de Ursua, and we’re back in the absurd mainstream of the movie: an allegorical tragical-historical-comical-pastoral tale unwound in a scenario naïve as a kids’ Saturday matinee adventure serial. How shallowly Aguirre‘s “themes” are treated! Here’s your hoary old Leyenda Negra: priest and soldier consumed alike by lust for gold! Here’s your Fascism theme: Aguirre’s faction, determined to press on down the river toward El Dorado, kills a few dissidents and wounds de Ursua. “Now that we’re free of uncertainty,” Aguirre declares, turning to the fat, befuddled de Guzman, “we need a Fuehrer.” And here are your obligatory nods to the Problem of Racism: a black soldier stripped and ordered to run ahead of the landing party, to frighten the cannibals: a dignified captive Indian whose real name, Runo Dimac, signified El Que Habla, reduced to “Balthasar,” and in chains. He muses that his people once lowered their eyes when he approached, fearing to look on his nobility; now they still do, refusing to witness his shame.

Genre stuff, really; pop stuff, a comic book of the Conquest. But what a comic book! You open it up: the expedition is descending the mountain, frames bursting with color and movement. The Spaniards in their gleaming helmets and armor, cursing the mud; a princess, a lady in lace glimpsed through a driving rain, sitting in a palanquin carried by red-wool-capped Indians; llamas; horses; a native bearing a figure of the Virgin. And through it all, Kinski, absurd Teuton, the Bad Guy, a böse Beowulf, a Geat, the long blond hair streaming out from under his helmet, fingers like goddam claws curling out of jet-black gloves, Kinski, developing a BuÃ±uelian list to one side, lurching, his enormous mouth twisting with a life of its own. And the princess, an arrow in her side, dying in Aguirre’s arms as the raft rides up onto the bank and snags amid engulfing green jungle shrubbery—a very long, slow, Liebestodian take of this, the camera tracking closer and closer, the screen filling erotically with her luxurious blonde hair, and marmoreal skin, and expiring, doe eyes. Vulgar, nicht wahr?

And under all this rococo, the fine Old Reliables of the genre, The raging rapids; savages glimpsed along the banks of the river; unsettling stillnesses, bird cries and noises of unfamiliar animals; a sense of danger ever present. Slow panning movement along those thickly overgrown, ominously silent river banks. A sudden, whirring storm of Indian arrows, Ã  la Agincourt; an ever-so-slight shift of the camera that discloses the lethal short arrow embedded in a soldier’s neck.

What the hell! It’s minutes later. Another skirmish; another soldier hit. “Hey,â€ says this one, toppling over into the drink, holding his neck. “The long arrows are back in style!”

I dunno, maybe it is a disaster, kind of. Foreign film distributors should only send more disasters like Aguirre our way. 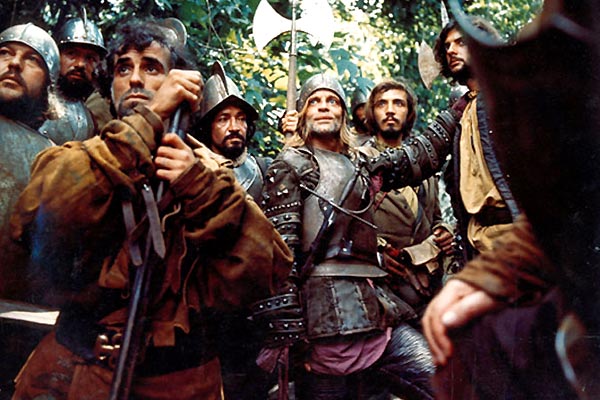